hello and welcome to 08ip04.blogspot.com :D

We're the hottest, sexiest class ever. (:
We're the best across, wonderous adventurous!
We fear nothing, seeking nothing but the best!

AND,
THE SAIKANG-EST JOB ON EARTH: YOUR IT REP.


The Chronicles of a Certain Bubbletea Flavour
[Hint: It's purple =.=]

Written by: An Unfortunate Person

Once upon a time, there were four girls from the class of o8IP04, National Junior College. These four female protagonists of my chronicle happens to be Amanda Mak, Han Jia Li, Chung Jia Yi and Ng Shou Jin, and we all know that the former happens to have an incurable mental problem possibly inflicted by sheer stress on schoolwork.

Upon hearing that lesson IS1109 was cancelled for the day, these four girls made their way down to the canteen, as Jiali had wanted a drink. It ended up that all four of them got a drink as well.

Amanda, at a sudden twist of inspiration, decided to "try out something new" at the bubbletea store. After staring at the board, laughing to herself for a few minutes, she turned to her other three friends.

And the rest of her friends went: O.O. Then they encouraged her to go on with her sudden twist of inspiration. As she stood in front of the counter, she hesitated, looking at the other three with uncertainty in her big, big eyes.

"GO! GO! GO!" they urged her and she whirled around quickly at the impatient auntie at the drinks store and went firmly,

The auntie at the drinks store was also surprised at the order that she had to double confirm it with a wide eyes and an incredulous expression. She had to dig out the tub of *potent* purple powder to make the drink.

Next, while Jiali, Jiayi and Shoujin watch on in amusement and suspense, Amanda took a sip...

"It's okay leh actually." she went. So she went on a spree to trick people unknowingly; even to her three friends sitting there like ducks in a trap who naively believed her.

ROLL OF THE TRICKED:

1. Jiayi- tasted it for a while before grudgingly decided it was "okay"

3. Shoujin- thought it was absolutely disgusting and wondered how disastrous it would be in milk tea

4. Nadine- got tricked into thinking the purple drink was grape flavoured and took a sip and stood there in a state of shock and sianification before swallowing and dumping the cup at the steps, stalking off to get a PROPER cup of drink. XD later she commented that the grape from the "grape drink" was taken from the canals of pulau ubin.

5. Nigel- amanda didnt give him time to even react to the foulness. oh i mean, fragrance.

6. Joewei- got tricked into thinking it was grape flavoured as well. took a sip and took there, equally stunned with his face all scrunched up and speechless. he later proceeded to spit the purple concoction into a nearby rubbish bin, extremely disgusted.

7. Ervin- he had already guessed it was yam, and said he'll kill mak if it really was. so...when he drank he was already prepared for it.

8. Matthew- this dude is impossible. he simply snatched the thing without us telling him the flavour...and drained the thing ==.== then he claimed it was because he was thirsty =.=

thus the end of this lor-soh story requested by amanda, jiayi and jiali. so i guess you know who the author is right now.

end off with a requested picture: 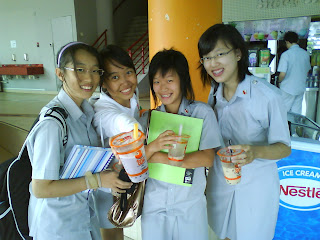 see the hot celebrity of the chronicle?